Jan Klingler’s Bacteria lamp is a crossover between science, art, and industrial design

”People are absolutely intrigued by the abstract patterns and colours of the microbes and often won’t believe that bacteria can be this beautiful,” he says. 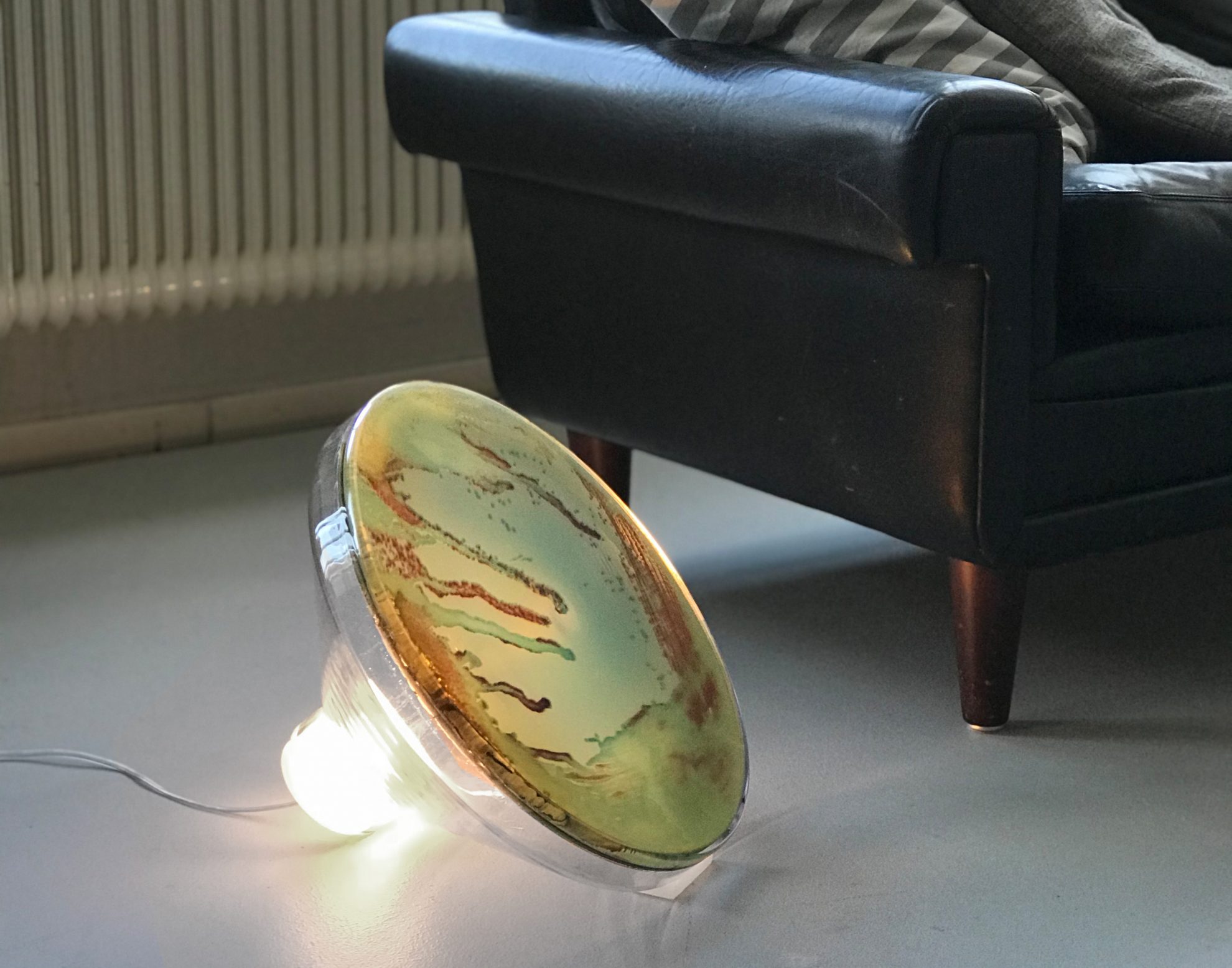 Originally trained as an industrial designer, Klingler received his bachelor’s degree at the HAWK University in Hildesheim, Germany. While having a great time learning the basic toolset that is needed to work in the field, he explains how he also became more and more conflicted in his practice.

— I felt that I was solely creating items based on my personal pleasure to design. I started to ask myself if the world really needed yet another designer to create objects that have a shorter and shorter lifespan in our society of fast consumption. So, I pursued my master’s degree at Konstfack in Stockholm, to find purpose and meaning in my creative work by finding a way to create strong and long-lasting relationships between my creations and their new owners, he says.

The starting point for creating the Bacteria lamp was to look at his own personal belongings. Having moved across borders 5 times during his studies, they had been reduced to an all-time minimum. Next to the core necessities of things like clothing there were also quite a few oddities.

— For example, a wooden chess set that had no apparent purpose as I did not play chess and did not have a strong urge to learn it. Or an aftershave that I was not able to use as it made my skin itch in an allergic reaction. Yet, I chose to take these things with me wherever I went. But why? It is the story behind these objects that made them so important to me. Both of them were inherited and carried memories of very special persons who are no longer with us. When I looked at the chess set, I thought of my great-grandmother, a strong, opinionated woman with a big heart. When I smelled the aftershave, I immediately had flashbacks to happy moments with my grandfather during my childhood.

The Bacteria lamp, he tells, is the result of his research on how to give new objects the opportunity to be vessels of past memories and give them a deeper relationship with their owner.

— We all consist of 10 times more bacteria than human cells. Every living being and place has its own unique and personal microbiological fingerprint. In a crossover between science, art, and industrial design, I created the bacteria lamp, which uses this fact to create stand out conversational pieces.

How do you create it?

— Samples are taken from people, places, or things that hold a position of importance, and are grown into a unique piece in the form of commissioned work. May it be the location of a first date, a personal souvenir from a memorable journey, or the reminder of loved one far away — the possibilities are as individual as each one of us. After a growth period of twenty-four to forty-eight hours the microorganisms are fully sealed to stop the growth and they are captured in stasis.

What’s been your greatest challenge?

— As I am a designer and not an expert in microbiology, I obviously wanted to work safely. I was guided and helped by a specialist in the field, Volkan Özenci M.D., Ph.D. from Karolinska University in Stockholm. In a world where we think we have seen everything, this collaboration really proves the importance of interdisciplinary collaboration. Thanks to patience and diligence, we were both able to develop a common language between the world of design and science, which allowed us to obtain a greater understanding of the different fields and workflows in a safe and effective manner.

How’s the feedback been?

— People are absolutely intrigued by the abstract patterns and colours of the microbes and often won’t believe that bacteria can be this beautiful. The pieces with well-known origins from places in Stockholm, such as the Royal Palace, have started many questions and conversations.

The works, Klingler tells, inspire people to immediately think and talk about the places or people they would like to immortalize in a commissioned bacteria lamp.

— Being ”fossilized” and hence nonviable they are static and non-changing, serving as the ideal captured memory.

With the COVID-19 outbreak and recent conversations, it also became quite clear that the vast majority of the population does not know the difference between bacteria and a virus.

— That’s the reason I am planning to dedicate some of my work to use the power of art and design to educate and inform.

As mentioned, the bacteria lamp is not a mass-produced object, but available in the form of commissioned work. This way it can be personalized by sending a sterile sampling kit to the customer.

— After swabbing the skin of a person, place, or object that is important to them the kit is sent back to me to grow a truly individual piece — both in color and pattern, says Klingler. He continues:

— As a personal example, I have taken a sample from a column in Östermalmstorg in Stockholm, which is the place where I first met my fiancé. As an abstract reminder of the start of our relationship, it was very interesting to see how my partner bonded strongly with this lamp like I envisioned it to happen.

While Klingler already has new projects coming up which use the material of bacteria, he’s just presented his newest work at Bukowski’s auction house in Stockholm. Named Crucible of Light, it’s highlighting the proud Swedish glassblowing history.

— The crucible is an essential part of the modern glass history of Sweden, used by world-renowned artisans to heat glass at a constant temperature of 1120 Celsius. After months of tireless work, the ceramic melting pot is rendered unusable, and the glass remains within. Difficult to dispose of, most crucibles find an unremarkable life in the garden behind the hot shop. These beautiful, strong objects deserve more. By turning the melting pot into a utilitarian object in the form of a lit coffee table, it becomes a centerpiece in the home environment, he tells.

What better way to highlight the visual appearance of the intricate, cracked glass than by lighting it from below? Now, the melting pot is reborn as a Crucible of Light.

— Inspired by the reduction of waste through design, the crucible is now the basis of a circular economy that includes well-known glass workshops in Sweden, such as The Glass Factory in Boda and Glasbolaget in Bro. Rather than disposing of the old melting pots, I arrange the transportation to my studio, and in return, help to provide the hot shops with a brand new one. The repurposed Crucible of Light is then sold privately or through galleries, and new revenue allows us to repeat the process when the next crucible retires. With the intention to widen the circle of participating glass workshops, I hope to create value in what was once considered waste, thereby contributing to the continued success of the historical craft of glassblowing, says Klingler. He adds:

— Design can be so many things to so many people — utilitarian, effective, artistic. I just hope that I am able to bring a sense of personalization to design, by finding connections that bridge disciplines like art, design, and science together to create objects that create a sense of emotion. I love doing what I do, and I am grateful for the recognition. I hope to continue to keep surprising you. • 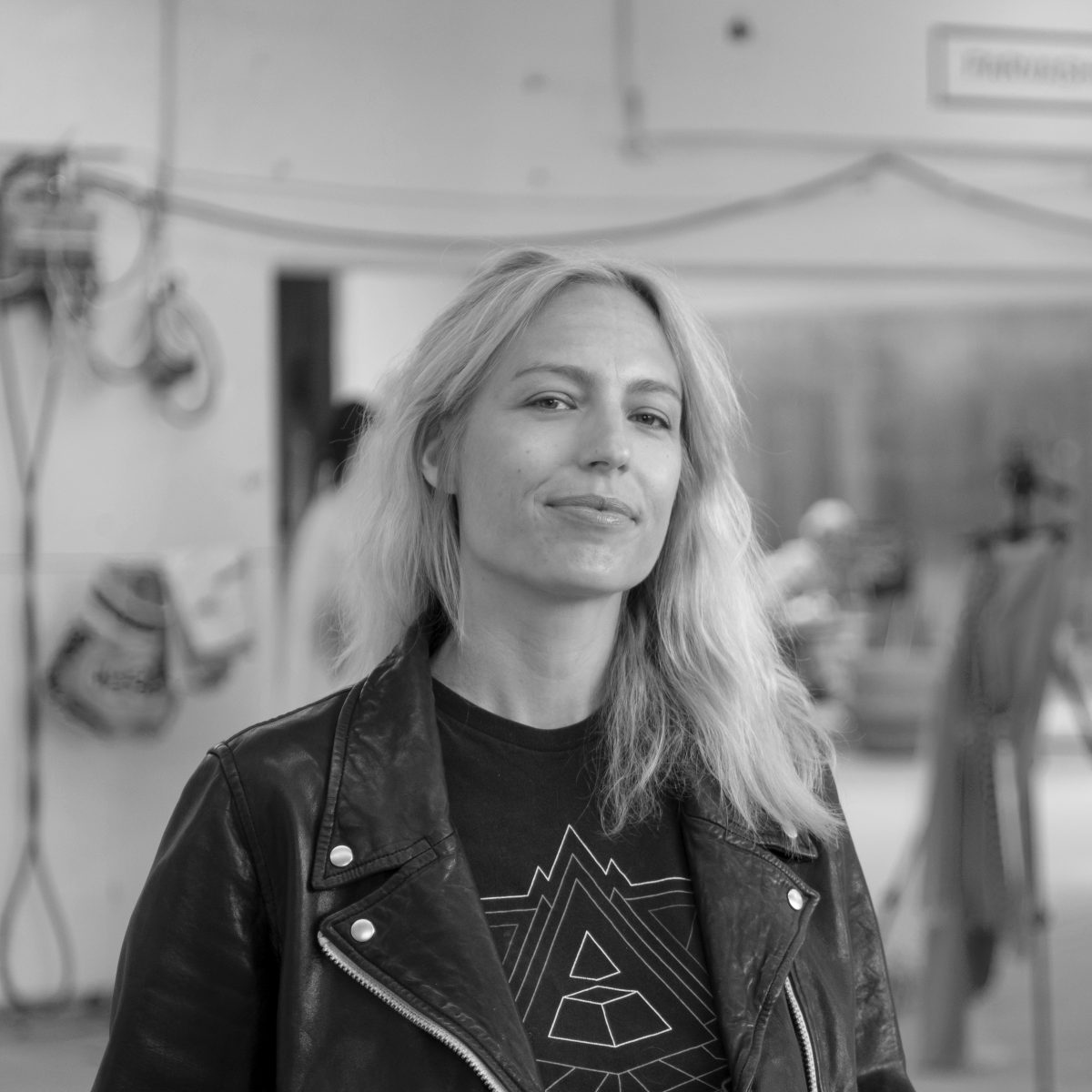 PAOLA BJÄRINGER
The Misschiefs founder on their new pop-up in Stockholm.
EDITOR’S LETTER
Welcome to a platform bridging lifestyle and technology

KONRAD OLSSON
Our Editor-In-Chief on the launch of Scandinavian MIND.