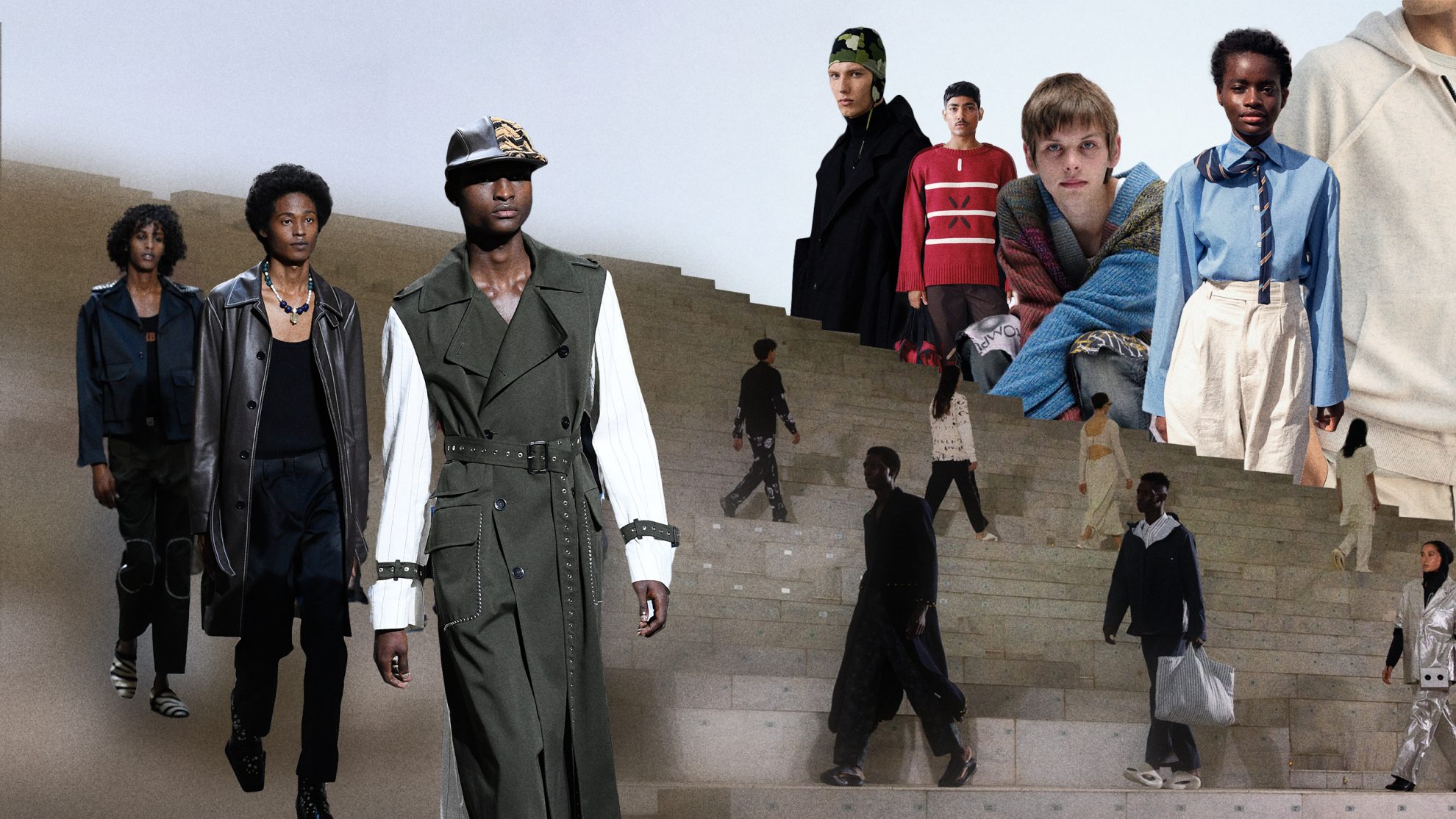 BRIEFING
Nordic creativity, innovative sustainability, and Ukrainian fashion at Pitti Uomo 102
For the first time since the pandemic, the trade show returned to a sort of ”normal” standard and gathered buyers and fashion media from all over the world for menswear’s finest hour.
By Oliver Dahle

With a packed schedule, the menswear festival that is Pitti Uomo returned to off-site shows. Grace Wales Bonner was headlining the first day with her eponymous label. Being born in 1992, the British designer is one of the most promising stars on the international fashion scene and has been awarded several international awards since her graduation from Central Saint Martins in 2014; with CFDA International Men’s Designer of the Year in 2021 as the most notable one.

Palazzo Medici Riccardi was the scene for the show and the artist Ibrahim Mahama dressed the Renaissance palace in jute sacks that were used to export cocoa from Ghana. The palace bears more meaning than just being home to one of the noblest families of the Florentine renaissance. In fact, it was home to Alessandro de’ Medici. Believed to be born from a servant of African descent, he’s considered the first black head of state in modern western European history.

On day two it was time for Soulland to take the center stage. The brand that is founded by Silas Oda Adler and Jacob Kampp Berliner. At Pitti Uomo, the Danes presented the first of two instalments of its SS23 collection, named Brain House. The first volume is called The Spring Devil. The second one will be presented during Copenhagen Fashion Week, later this summer.

The show took place in plein air at the Cavea of Teatro del Maggio Musicale Fiorentino. A modern, minimalistic auditorium, that created a subtle backdrop to the show. For the first time, the collection was completely genderless. “I have been working on finding a balance between menswear and womenswear for years. I love designing different silhouettes, but I don’t think it’s my job to decide or define who wears what and why”, Adler, Creative Director of Soulland, commented.

The collection revealed the continuation of the brand’s collaboration with the Chinese sportswear brand Li-Ning in which the two, team up to create clothing to go with their running trainers. As well as a new collaboration with Ace and Tate on eyewear.

At the fair within Fortezza da Basso, there was a strong presence from the Nordics, that showcased a variety of northern European creativity.

One example was Finnish Rolf Ekroth who presented its upcoming SS23 collection called Camp Broken Arm. The collection builds upon Ekroth’s nostalgic childhood memories from summers that were spent on camps, combined with Finnish handicrafts. Ekroth described the collection as joyful and optimistic in a bleak time. The inspiration expressed itself most prominently in the jacket that comes with 230 handmade friendship bracelets, creating an illusion of a Finnish rag rug and the connection to childhood.

Another was Bengt Paris, founded by the swede, Bengt Jimi Roos. Roos have been producing hand-embroidered, unique garments from his atelier in Paris. At Pitti Uomo, he was presenting his upcoming SS23 collection which will be a more elaborated collection, produced in Italy, that will build on the work from Roos atelier in Paris.

Waste Yarn Project is producing knitwear from leftover material coming from the fashion industry. The brand is run by Siri Johansen, who is born outside of Oslo, educated in London and now based in Paris. With extensive experience in the global fashion industry (before starting WYP, Johansen worked as Head of Knitwear at Kenzo) the brand was founded on the knowledge of how much waste is being un-used within the industry (hence, the name).

Another return at Pitti Uomo 102, was the section Scandinavian Manifesto, in which eight Scandinavian brands manifested their upcoming collections.

One participant was Palmes. A brand that was born out of the pandemic, when founder Nikolaj Hansen started playing tennis. As a newcomer to the sport, he felt a bit like an outsider when looking for the right tennis gear. Either he found that brands were too technical or too heritage-driven, and neither appealed nor felt accessible to Hansen. Hence, Palmes was born. The brand combines sleek training gear — that is equally suited for the tennis track, as a hot summer’s day in the city — with off-track clothing such as tailoring, printed t-shirts and hoodies.

Frederik Berner Kühl is the designer of his eponymous label, which returned to somewhat home grounds, since he was trained at Polimoda, in Florence. The design ethos of his brand is built upon creating luxurious and performance-driven tailoring that will stand the test of time, in which a lot of work goes into the research of materials.

Adnym, that is making genderless, sleek clothes presented its collection Indutus In Horto, which is Latin for Dressed in the Garden. A joyful collection that comes with timeless garments, in modern, updated silhouettes.

By Death, who are ”resurrecting” vintage garments with dying techniques and hand-embroidery from its studio in Copenhagen. by fetching inspiration from heavy metal and biker clubs.

Other brands included Wood Wood presented the upcoming collection from its new designer, Dominic Huckbody, that most recently came from Burberry. BLK DNM was present, under the new Creative Direction of Jessy Heuvelink, they are in the midst of a rebranding and is heading for an elevated look, that is inspired by the 70s and rock n’ roll. As well as Rue de Tokyo, which builds on timelessness and elevated basics. Soulland also took part in Scandinavian Manifesto.

A big, and growing, part of Pitti Uomo is the focus on sustainability. One section, S|Style (where Waste Yarn Project was present), is fully dedicated to emerging brands and designers that have adopted new sustainability practices. But, the matter of sustainability is also becoming a bigger part of the fair as a whole.

A vanguard when it comes to sustainable practices, is the British brand, Ræburn, which is nominated for the Zalando Sustainability Award that will be revealed during Copenhagen Fashion Week. The brand has since its foundation in 2009, been redefining and finding new ways of working with sustainable methods. They’re most famous for their remade-line, in which they are reworking surplus material into new designs. Inspired by military garments and utilitarian wear, the brand is for SS23 fetching inspiration from the SR-71 Blackbird, a reconnaissance aircraft that in 1976 set the record for the fastest air-breathing hand manned aircraft, a record it still holds to this date.

At Pitti Uomo, up-and-coming brands presented new definitions of how sustainability could be interpreted. May be the more slow-fashion paced approach from the French brand MAXIME, builds upon the idea of home and the serenity and calmness that comes with it. Or how the Indian brand Margn utilizes female communities in the Himalayas to create its handmade garments.

Even bigger brands that lead the sustainability way, showed that commitments and pledges are the way forward. One example is Save The Duck, the first Italian fashion brand to receive B-corp status, that started out making winter jackets without harming any animals. Another sustainability advocate is the Spanish brand Ecoalf, which presented its more fashionable line Ecoalf 1.0. Also with B-corp status, the brand is producing clothes made out of recycled materials.

The topic of sustainability was also very much present in the section entitled Ukrainian Fashion Now! The section was dedicated to eleven Ukrainian designers that we’re able to showcase its collections. Worth noticing here is that a majority of the brands and designers are producing their collections within Ukraine — and that they now have been able to start producing once again.

One of the brands that were present was VIKTORANISIMOV. Founded by Viktor Anisimov, the brand has been a pioneer within Ukrainian fashion. Anisimov himself was born in the Chernihiv region and has spent a big part of his life in Donetsk. Two areas heavily affected by the invasion.

.— There are still so many questions about production and creativity. During these three months, I haven’t seen beauty around me at all, even my beloved sky lost its colour… How can I force myself to make some kind of pants or t-shirts when thousands of people are killed? You can’t force yourself to do anything. And anyway, who needs it? People want to survive, they need food and water, not fashionable things. Of course, people who are living outside of Ukraine still have the same needs, which is why Ukrainian designers need to resume their work. Our job is a lifeline that will hold us and strive for life. Ukrainian people are extremely strong and determined by their nature. We understand that there is only one way to get back to normal life – keep working and doing everything that depends on us, Anisimov comments on the ongoing situation.